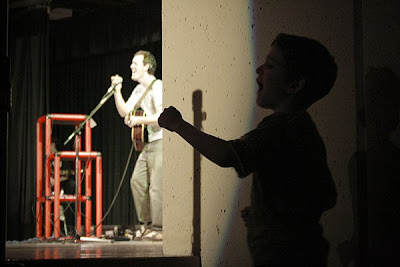 The micro-tour with AVS has begun!

We performed at a cafetorium in Thornhill, at St Elizabeth’s high school as part of a music night, and it was great. The stage was excellent, and the audience was really receptive to all types of music (we shared the stage with latin, singer/songwriter, a capella groups and more).

During my performance, I even had a young boy stand off to the side and mimic every movement that I was doing. Thanks to Scott Mackay of AVS from capturing the moment!

Before that, we had an interesting day, having driving from Thunder Bay through the night, we arrived in Thornhill, and had 2 interesting experiences: we founda person on drugs in a park that was coming down, and on the verge of passing out. He had scrapes on his forehead and back of his hand, and it looked like he had bit his tongue badly. He was having trouble walking and claimed to have had problems with his back. Some students from the high school were there and had called paramedics, who arrived shortly after we got there. Naturally, the guy was angry that we had alerted some form of authority.

After that, we headed to The Pickle Barrel, a little restaurant in a mall across the street. Our server was great at first, but then as the evening progressed, he continued to upsell us and then even got mad at the end when we wanted to pay for our meals separately instead of one lump sum for 5 people. Weak.

Regardless, tonight we’re in Guelph, playing at Jimmy Jazz, which our friend Brent Coleman has organized for us.

Here’s one of his lyrics: