Played an awesome house concert in Sudbury two nights ago. 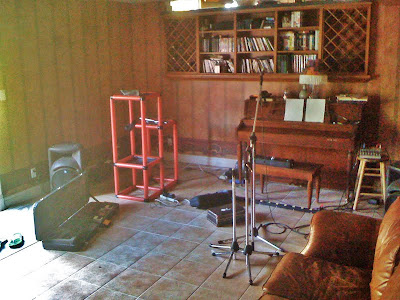 Clayton Drake of M Lemon and the Birthday Cakes is an awesome host (not to forget John too), and I’ve been at their place for the last 2 nights, playing music in the basement, going out for breakfast at a little diner, or just sitting around talking about music and what we’re all doing musically. Lots of tour stories and ‘shop talk’. We had about 30 people crammed into the basement for the show, and everyone had a really good time, I’m excited to come back and have everyone come out once again. Although, next time I’ll be at the Nightclub, which is apparently in the same building as a stripclub. Hopefully they’re not expecting THAT kind of show!

The other bands that played were Little Albert, an improv noise group that totally one-upped me by using not one, but two theremins, as well as a bassist that had two (smaller) loop stations. I followed them, and then Andrew Lavoie came on and did some acoustic solo work, incorporating delay loops into some originals, blues and a few covers. Solid night!

North Bay tonight, should be a lot of fun, as I’m on a bill with the Rough Sea and Greater Than Giants; an eclectic mix! My favorite!