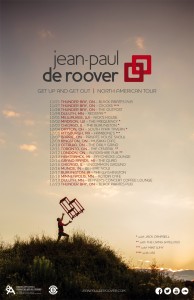 “The mad scientist of the Thunder Bay music scene” [Exclaim! magazine] is heading back out on the road, taking his music beyond the southern border… again. After recently completing a 50-day tour of Western Canada and the US, De Roover hasn’t quite had enough of the continent.

Beginning on November 29th, De Roover will be headed Eastward, moving around the southern side of the Great Lakes, before entering southern Ontario for a string of shows, eventually returning via the American Midwest by December 20th. While the first set of dates of the international tour included stops at various live-looping festivals, the Eastern dates will include several co-headlining shows with artists like Jack Campbell (Chicago, IL) [4 shows], The Living Satellites (Toronto, ON) [2 shows] and fellow loop festival alumni Mike Why (Pittsburgh, PA) (1 show). This tour will still see De Roover performing solo, but adding to his existing live looping arsenal by incorporating elements from the newest album through samples as he performs at various types of venues with material that is sure to impress, whatever the setting.

De Roover’s professional career has seen him spending less time on the road this past year. After working on a film score for an IMAX documentary over the Fall and Winter of 2013/2014, De Roover temporarily relocated to Toronto to work with the team at Coalition Music, known for their commitment to artist development and education (as well as managing Our Lady Peace and Simple Plan to name a few). His personal life has also seen changes, having bought a house promptly after returning from Southern Ontario and getting married to Shannon Lepere, his partner of almost 7 years. In fact, the upcoming tour’s name comes from a lyric in the song “Hope” (from his 2013 album “Complexity in Simplicity”), whose acoustic music video will feature Lepere on guest vocals. The video was released in October in conjunction with the beginning of the Western portion of the tour.

Despite taking these considerable personal and professional strides this year, De Roover is excited to go back to the drawing board for some new recording projects. But before that happens, he’s heading out on the road one last time before the year is over.

GET UP AND GET OUT | NORTH AMERICAN TOUR