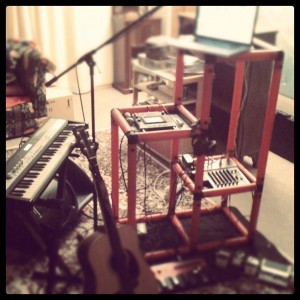 Even though I told myself I wouldn’t be playing much this summer – it’s creeped in there. I’ve been rehearsing for festivals, random shows, and more since getting back from the Year of the Loop tour.

What you see above is my current rehearsal space in my parents’ basement. So what?! With my looping being based on foot pedals, I can’t really ‘jam’ in the second floor apartment I’m currently in!

I have taken some time to work on new material though. Finishing writing a slew of songs, as well as preparing others to be played live. I even took a little trip up to Sioux Lookout to rehearse with Dennis Dumphy, drummer extraordinaire. 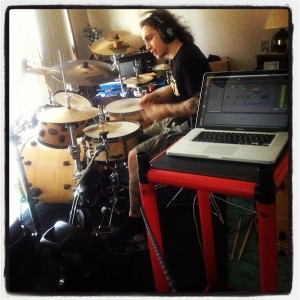 Why, you may ask? Well, because he’s going to be playing on the new album!

Yes, it’s in the works. No, it’s not going to be ready any time soon. Trust me though, it’ll be worth the wait. I’ve got an excellent team of people assembled to help me get through the recording process in September.

Ben Leggett – recently produced Craig Cardiff’s Juno-nominated album ‘Floods and Fires’, and will be producing mine shortly! We’ve been hard at work since the spring, redefining, rewriting and reworking even the finest details of the songs that will comprise the new recording.

Dining Room Studios – my favorite studio and engineers; Chris Dorota and Dave Angell will make sure it sounds like ‘me’.

Dennis Dumphy and Chris Dorota will flesh out the ‘live band’ element, adding drums and bass overtop of my existing sounds.

As we get closer to the actual recording, I’ll be filling you all in on what it’s going to sound like, who else is involved, etc. I just wanted to let you know that I’ve been rehearsing…for something big!