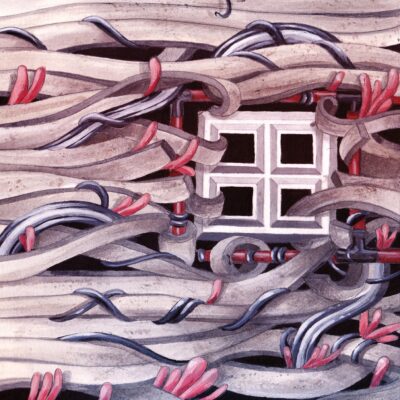 
*limited edition album with bonus DVD and 3D packaging is SOLD OUT!

“Intensity is the cornerstone of Windows and Doors…And really, that’s the brilliance of this album: De Roover’s ability to take rather simple chord progressions…and create deep layers of interest. This isn’t an album of dreamy, purposeless folk rock; it’s an album on a mission. (3.5/5)” – Miranda Nelson – The Georgia Straight

“What Jean-Paul De Roover has delivered is something that is inspirational, creative, engaging, calming and intensely disturbing at times. What this album ISN’T is safe, formulaic, and predictable. The few tunes that are set to a more traditional 4/4 time rock beat seem to act almost as traps, blinding you of the rabbit hole the next track is going to plunge you headlong into. …this album is custom made for anyone that demands a little more than what is offered from their music.” – Derek Wall – The Argus

“Windows and Doors is a mixed bag – but that just adds to the whole theme of choices, the listener has a variety to pick from and no choice is the wrong one.” – Jessica Ireland – Interrobang

“I’m a ‘metal guy’. Everyone knows that ‘metal guy’s’ don’t use the word gorgeous to describe music. One listen to Jean-Paul De Roover’s debut full length ‘Windows and Doors’ and I caught myself saying it over and over again. There is an incredible attention to detail that a lot of other people either miss or ignore… [he] has a fantastic sense of melody, song craft and a devious mind when it comes to musical experimentation. – Jason Wellwood – Program Manager & Loud Rock Director for CILU 102.7 FM