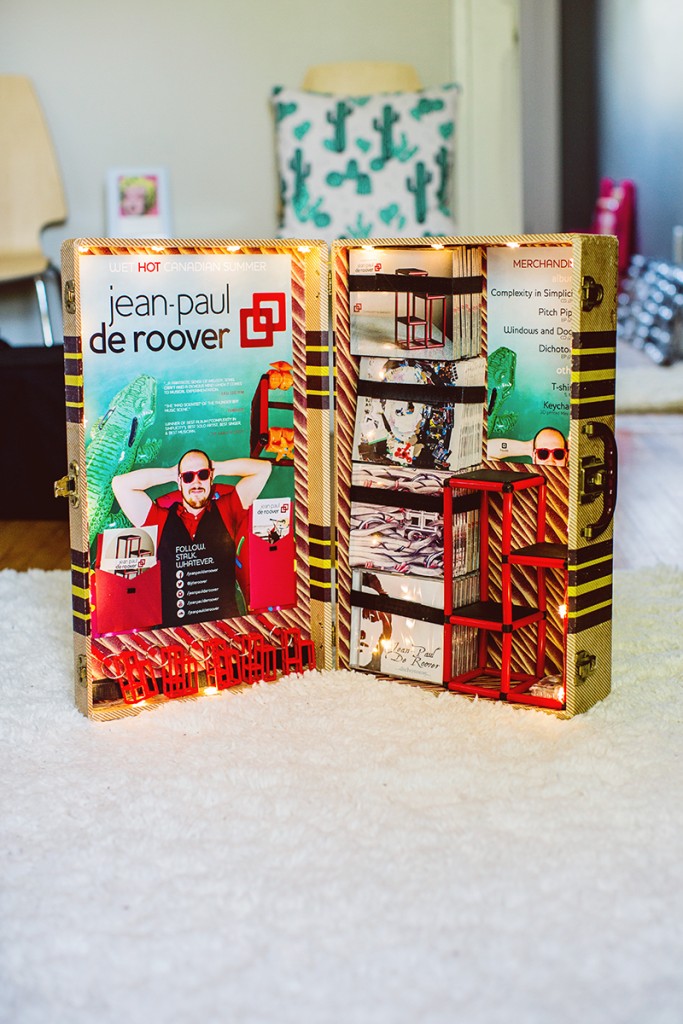 I’ve always received lots of compliments on my merchandise displays when I’m out on tour, not only because of the variety of merch (CD’s, shirts, 3D printed keychains, stickers) but because of my attention to how it looks. Whether it’s just a nice table cloth to go underneath everything, or making sure the shirts are ironed, it’s those little things that could help you net that one last sale at the end of the night that fills your gas tank.

*See the gallery below*

My wife Shannon and I started searching for a suitcase to convert into a merch display since I was tired of having to constantly set up and layout all my CD’s and other items every single night. Not to mention, I wanted something that was easy to set up when performing at non-traditional venues like farmer’s markets or street busking. The goal was to fit lots of CD stock with room to hold t-shirts that would be displayed on the table the suitcase would stand up on. What’s not pictured is a tupperware container I use for additional CD stock, 3D printed keychains, t-shirts and more.

We settled on this nice lightweight vintage suitcase from an antique store in Grand Marais, MN, and brought it back to Thunder Bay, ON to start building. At first we wondered how everything would work, but after some trips to Home Depot and Canadian Tire we found some solution. Instead of using a staple gun or something similar, we opted to use hot glue to attach four pieces of L-shaped metal bracing that would keep the CD’s from sliding top to bottom. I wouldn’t recommend using hot glue in most circumstances, but because of the fact that the CD’s were already pretty tightly packed into the suitcase, the metal pieces aren’t really bearing much weight – moreso just maintaining the spacing between each group of discs. We then attached some strips of double sided velcro in order to prevent sliding from left to right (again, with hot glue).

A tour poster and price listing were designed and then printed at a local print shop, attached to the interior of the suitcase with “zots” or glue dots. Thankfully the suitcase had a paper lining, making it infinitely easier to attach everything with glue or tape, as well as avoid any residual odours from the previous owner(s).

Shannon took some time to paint some mini-clothespins that could be used to hold the 3D printed mini-pipe keychains in an orderly fashion. Again, using hot glue they were attached to the suitcase. The problem with keychains is that they dangle. Because of this, closing the lid would have been impossible. After a quick stop at a local fabric store I picked up some elastic which was – you guessed it – attached using hot glue. The elastic would help keep the keychains against the lid of the suitcase, allowing me to open and close it easily. I also made sure to glue it in such a way that it could be tucked behind the keychains when on display and not be overly noticed. I’m not worried about the glue being under too much pressure as the elasticity of the ribbon isn’t really being activated.

The lighting strand came from Shannon, and was a leftover from some Christmas shopping she had done last year. I had already purchased a thicker tube of Christmas lighting but it was too bulky and had an automatic colour-changing feature that would piss off any venue owner. Besides, the smaller ones do such a great job of lighting up the suitcase that I don’t have a problem in the darkest of venues. Because it’s essentially very small lights attached only by very thin exposed copper wires, I opted to tape them to the case rather than use hot glue. Additionally, it’s battery powered so I’m not limited by access to a power outlet!

Finally, I spent some extra time glueing in some more velcro to attach some pens and sharpies (perfect for that mailing list and or signing CD’s), as well as a Square credit card reader. All the essentials would be covered!

Have a look through the photo gallery and let me know what you think. Hopefully it’ll inspire you to retro-fit some of your own luggage for when you hit the road next!

I’m on tour this summer, so I’ll let you know how it holds up!