I was slated to be the only performer at the Grad House that night. Before I got to the show, Shannon and I went in to Sound FM to do a quick on-air interview/performance with DJ Cool.  Sound FM had been voted off the Waterloo campus by the students, so their new location was above Maxwell’s Music House (which is, in itself, quite a facility, having a community radio station, live music venue, bar, and rehearsal spaces for bands).  Either way, Dj Cool was a lot of fun, and we even discussed strange natural remedies on air after the interview.  Who knew that olives could help to settle your stomach when traveling? 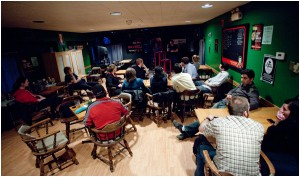 The Grad House is on the University of Waterloo campus, and plays host to all kinds of things for students at the graduate level. The room was filled mostly by PoliSci majors, largely thanks to my good friend Conrad Koczorowski who helped with a lot of the promo.  About half the crowd was from Thunder Bay to boot.  We had the opportunity to go and watch Shannon’s friend Taylor play dodgeball (yes, in a league and all), but unfortunately, the show ran late so we arrived in time to watch them pack up. We crashed at his place that night, where we met his very rare female tabby cat. She’s so pleasant! 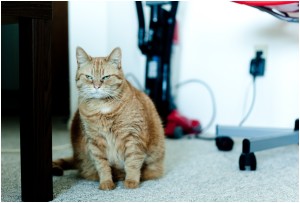