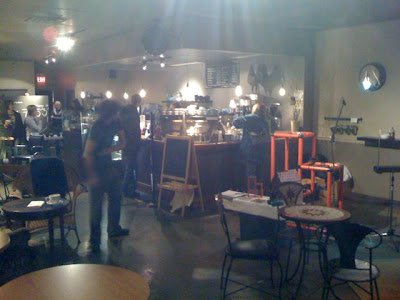 After hauling to Calgary from Kelowna, I took a quick nap before I headed out to cochrane to play at a coffee shop. Java Jamboree was having a ‘cupping’ which is coffee speak for ‘tasting’, and I was to play before it, and potentially after if the crowd so desired. They did, so I gladly obliged!

It was an interesting evening, because at one point I played a song called ‘Pensando En Ti’, which is sung in Spanish. Before beginning I asked if there were any Spanish speakers in the room, and surprisingly there was one (I say surprising because this was in Alberta – not none for that particular demographic). She understood and enjoyed the song, and was still around after the cupping, but had been joined by some new friends, so I offered to play it again for this new audience. Turns out, she’s part of an Honduran – Canadian exchange program, and so were all her friends…all 15+ of them! I tried to think of other music I could play that was in my repertoire, but drew a blank so I asked for a style of music to improvise and a lyrical theme to start with. Someone called out blues while another yelled ‘riding on a bus’. Everything was going well until the blues loop I had created started to truncate and was now missing part of a beat at the end of the phrase. I powered through, then asked for more lyrical inspiration. Although he said revolution, I definitely heard ‘evolution’, so for the next few minutes he sat there perplexed wondering why I was singing about Darwin instead of Che. Please note that I’m fluent in Spanish, but that doesn’t take away from the fact that singing about evolution is difficult on it’s own without having to worry about translating while keeping time over a dysfunctional blues loop.

Once that was over, they still wanted more, and requested La Bamba. 30 seconds later the latin dance party began, and didn’t stop for 15 – 20 minutes! After that, the show was over, and I chatted with my new compadres and comadres, leaving the staff confused as to what the hell had been going on for the last half hour!

I was even invited to a feast the next evening! Had the weather not turned to garbage and I didn’t have 2 shows the next day I definitely would have been there!