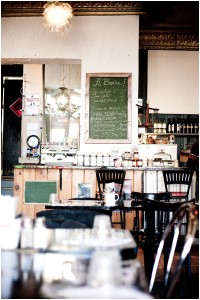 Everytime I go to Quebec I get excited about speaking French, because I’m so out of touch and love the practice.  Being a Spanish speaker, I find it much easier than the average person, but always find myself struggling for specific words.

After arriving in Riviere Du Loup, Shannon and I got settled in one of the extra rooms upstairs, and then came down for another epic pasta meal (like the one I had last time there).  Real shredded ham and prosciutto in a rich creamy sauce that trumps anything that Boston Pizza or other chains could ever serve (more about BP in another blog).

I was the only act that night, and just like the last time, I tried my hardest to introduce every song in French.  I was doing a pretty good job too, but also received a few pronunciation tips from the audience!  There’s one track in Spanish called “Pensando En Ti” which I dedicated to Shannon, however, I meant to dedicate to ‘my girlfriend’, but it came out as ‘my daughter’.  My bad!  At least the audience had a good laugh, because Shannon had no idea what the hell was going on!