I had wanted to go to the island a day before my show at the VIU pub, but because of the weather (winds of 70 km/hr) the ferries were canceled. So, technology served me well, as I posted on facebook about how I wasn’t able to get to the island, and soon I got a response from the person at the Georgia Straight that reviewed my album (Miranda Nelson) inviting me to another show happening that night in Vancouver. So I showed up, met her in person, and even ended up getting an opening slot for the band Jackie Treehorn (made up of members of Distracticon). It was at an interesting little African restaurant called Nyala, and I was wearing a ‘Wivestale‘ t-shirt, and ended up having several people recognize the shirt and make the Thunder Bay connection!

Ah, the Paragon Theatre! I had heard a lot about it, and was so excited to finally play there, that by the time soundcheck rolled around, I just had to take a picture of Slowcoaster prepping. 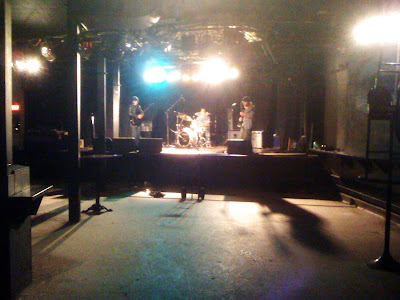 The show finally began, and it was also the closing party for the Nocturne festival. There were 4 artists doing a live painting in one part of the venue as well as the music (it was just myself and Slowcoaster). Over the course of the night, there was close to 500 people that had attended, and it showed! What an incredibly fun evening!

October 9th was my birthday! So of course, I spent it driving from Hamilton to Ottawa. But when I got there, I was surprised with a treasure hunt to a little bakery where I found these little treats from Shannon: 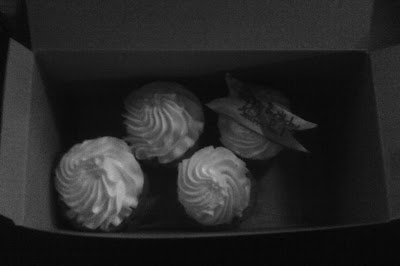 They were absolutely delicious, but so rich that we couldn’t eat more than one, and even later on I had to try to pawn them off on other bands because my stomach couldn’t handle the ‘buttercream’.

After that, I went out for celebratory poutine and a milkshake with Josh Hogan, and then I went to the show, which I was SUPER EXCITED FOR! I got to spend my birthday listening to awesome metal bands in a really tiny venue: Ninjaspy, What’s He Building In There? and Ace Kinkaid. My set went really well, but there was one hiccup during my final song with the sampler, but I shut it off, kept singing a cappella, then brought it all back together towards the end, and everyone recognized what an awesome save it was, and started applauding! It was a great moment. Ninjaspy was great, although they didn’t play my favorite breakdown (size of the room became a factor, ha!). What’s He Building In There were really cool, again blending genres with metal, and I’d become good friends with these guys over the next few weeks. Ace Kinkaid was an instrumental act, and jesus, they were great, and I’ve actually written a review of their disc which I might put up here if they’d like. After the show, I crashed at Ignacio’s place, where we caught up on each other’s lives, as well as our newest favorite comedians!