"How Come No Bones?" on Harmonium

While I was in Edmonton on the 3 month tour, my friend Andriko enlightened me on a new instrument, the harmonium! Since my theremin was removed from my possession in Winnipeg, I need a new niche instrument to entertain me, and I think I’ve found it! When I go to Toronto this March, I will find one and claim it! So drone-y, so delightful!

“How Come No Bones?” on Harmonium

While I was in Edmonton on the 3 month tour, my friend Andriko enlightened me on a new instrument, the harmonium! Since my theremin was removed from my possession in Winnipeg, I need a new niche instrument to entertain me, and I think I’ve found it! When I go to Toronto this March, I will find one and claim it! So drone-y, so delightful!

The Avenue Theatre was a really neat show. It was in a theatre, whose stage had been extended in order to cover up some skateboard bowls for when it had been a skatepark. The entire show was held on the stage, as it was an intimate, acoustic style show. In fact, I was the loudest act of the night, an interesting change! I also made some really cool friends that play in hardcore bands and also run a screen printing shop out of one of the back offices. It’s really great to see people being passionate about all ages concert spaces.

I made Edmonton a temporary home for 3 days, where I visited with old and new friends. I met Greg a few years ago when he was playing in a band called Mapping The Escape, and had booked them in Thunder Bay a few times. He opened up his place for a few nights, where we watched Saw 6, It’s Always Sunny In Philadelphia and waited for pizza for hours, only to receive it and be completely shocked at the size of their ‘medium’ pizzas. He’s in the process of putting together a new band, but in the meantime he does radio advertisements. I woke up one morning to the sounds of recording a new jingle for a funeral home. Pardon me. Funeral Homes. Connelly McKinley specifically. I wish I could link it, as it’s fantastic, super peppy with some jazz, and makes me laugh at it’s awesomeness every time.

Here’s a picture of me being the antonym of awesome. 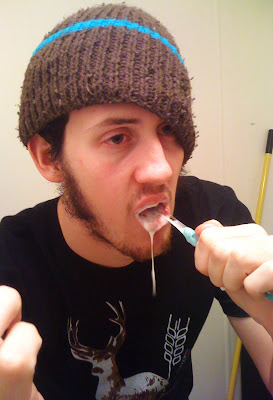 After that, I went and visited my friend Andriko, who used to play in Fractal Pattern and was also working on his MA at Lakehead with me. We partied hard. We watched a documentary on fonts, and went to a vegan restaurant, where he got the owner to purchase a CD of mine, and we listened to it on the spot. Awesome! That, and he introduced me to my new favorite instrument, the harmonium:

I ended up crashing at the promoter’s house (Timur), and he put me up for the next 2 nights after that too, as I was playing a cafe 2 nights later. The first of several friends made on the road that will be lasting friendships. I mean, who else gives you a brand new box of unopened Froot Loops for you to take on the road? Timur. That’s who.

But before I left St Catharines, I HAD to try the Steak and Poutine wrap from a local pita/wrap place, just because it sounded like it might kill me, and I had to take the risk! Results: delicious. 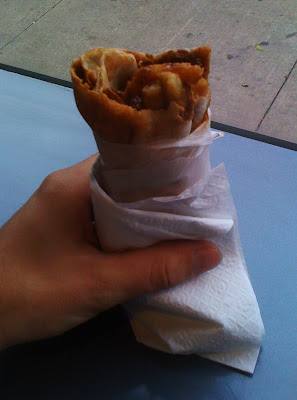