The next day I met up with Tom, the music director for CHSR in Fredericton, and I had an awesome experience. Not only did I do a recording which would go on air later, but I also managed to ‘convert’ him! When I called several weeks before to ask about my album’s radio play, he had said that he didn’t like the ‘over packaging’. Fair enough, there’s a lot of stuff, but I was skeptical. So when he and I did a little interview, I had a copy of the album in front of me and I explained every artistic nuance to the packaging, how it folded out, what everything meant symbolically, and how a listener was meant to interact with it. After that, there was definitely an “aaaaah” moment where he proceeded to ‘get’ the album, and fell in love with it on the spot (he had told me up front earlier that he liked the music, just not the packaging). So, chalk that one up on the board of achievements!

Also at the campus radio station, I found some local history on a door that was covered in stickers. 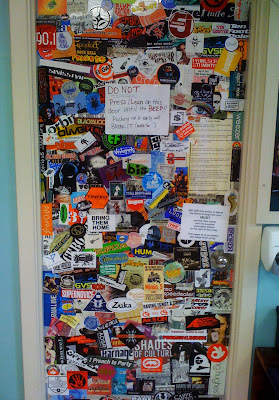 Zoom in closer and you’ll find this band from Thunder Bay. I had no idea they had done so much and reached this far! 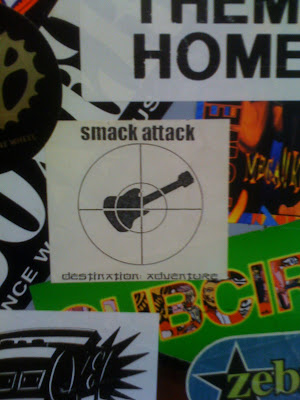