I was invited to this year’s NXNE in Toronto, so this entry will be a little synopsis of my trip, as well as a pseudo-review of my experiences during the festival.

The festival ran from Wednesday June 17th until Sunday, June 21st, however, there was little happening on the Wednesday and Sunday, so most of the activity occurred from the 18th to 20th.

The day began with a booth at the Indie Music Marketplace, where I had the opportunity to sell CD’s, and promote the show that night. Several other merchants were also performing at the same venue, so that was great to see. Beyond that, I made some new friends, including Mick DiMaio from StereoGoesStellar. Unfortunately they were playing that night as well, otherwise I would have loved to see their brand of piano pop/rock, which is reminiscent of Ben Folds, Something Corporate, and at times I even hear the voice of Placebo. Regardless, we talked about their recording process and their new album while registering for the festival, and by the time I popped the disc into the car, I was already hooked, and it’s still being listened to on a daily basis!

I was scheduled to perform on Thursday at The Painted Lady, a really cool little bar with pin-up/strip/burlesque memorabilia on the walls. The stage area was a little tight, and was situated at the back of the room, at what looked to be the end of a hallway no wider than 8 feet.
– The show began with a family act, The Wilkins, who put a fresh spin on a 70’s rock sound, because of the inclusion of synthesizers/keys.
– I followed, pushing through a severe cold which had almost rendered me voiceless, but the crowd still enjoyed it and got a taste for what it is that I do. 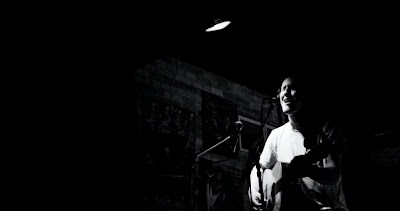 – After me was Rob Szabo, whom I had been informed not to perform after (like it was my choice), because no one else could even compare to his greatness. He delivered a powerful acoustic set, and my attention was drawn in more by his inclusion of a wooden foot pedal with a microphone inside to simulate stomping sounds simply by tapping the top of it with your foot. We chatted before his show, and he was a very kind and friendly person, and it would be great to share a stage with him again.
– After getting my first of two parking tickets, I decided to leave halfway through Paisley Jura‘s performance. I was disappointed because her band included trombone, glockenspiel, standup bass, lap-steel guitar, piano, drums and a bunch of other things too. We had met at the Indie Music Marketplace earlier that day, and it was really neat to see how she transformed from jeans and a sweater to an evening gown jazz/contemporary singer/performer.
– The last performer of the night was Solarists (pronounced So-LAHr-ists), whose frontman Cam McLellan was going to perform solo for the night. I had also met Cam earlier that day and was really saddened that I couldn’t stick around to watch his set. But the sickness was getting the better of me, so I ended my night early.

Friday was the first day of attending conferences, which I have to say were quite poorly advertised. The website made no mention of the different panels, and the only way I found out about the conferences was from a special NXNE issue of Lucid Media, which hightlighted the top 3. I later found a comprehensive listing, and even met up with some friends in The Furr from Winnipeg who I sat with in some of the panel discussions. We sat through two different panels, and left both of them early because they were not presenting anything informative or new, and in the case of one of the sessions, all of the panelists were engaged in conversation with a member of Fucked Up at the back of the room, and they spent the entire session discussing ridiculous tour stories from when they’d travel together. It was hilarious, for sure, but definitely a waste of time.

After the conferences, I made my way to Lacquer Channel to meet with Phil Demetro, who will be mastering my Windows and Doors album. As soon as I arrived I was excited, because he was in the middle of mastering a new remix of The Midway State – Change For You, a track I’d fallen in love with a while back. He gave me a quick show of the place, and even took the time to listen to some of the unmixed wav files so that he could assess what he would need to do. He was very pleased with the mixes as they were, and gave some additional praise to the guys at Dining Room Studios, making me feel very, very confident that this new album will end up sounding great! It was a perfect boost after a lacklustre showcase and poorly organized conferences.

I then made my way over the distillery area of Toronto, for a meeting at Balzac’s Coffee to meet with someone regarding the application process to become a musician for Cirque Du Soleil. Imagine that!

That evening, I manged to catch several different sets in a few different venues:

At Supermarket, I caught a little of Bass Lions, and then most of The Paint Movement‘s set. This showcase featured mostly Nevado Records‘ bands, and I’m definitely impressed with the quality of their signings, purchasing a Paint Movement disc before leaving. Moving on, I caught Crush Luther at Montana’s Sidestage. I’ve been listening to them for a while, and was really looking forward to a stellar set, but like many performances at NXNE, I found it to be a little tired, and less exciting than I had hoped for. Still, it was nice to hear some recognizable material at the festival filled with acts I’d never heard of. As we were leaving we saw 10 minutes of Parklane from South Africa, who played cliche hard rock/nu metal, but I still felt bad because there were only 3 people watching them by the end of their set which began at 1 am.

Again I attended the conferences, hoping for something more substantial than before. I was not so fortunate. I did however, manage to meet Matt Pollesel from iheartmusic.net, as well as someone who claimed to be the 10th most popular user on youtube.com. The secret to his success? He gets his friends and himself to grab an acoustic guitar and do cover renditions of songs that are currently popular, meaning that people will type in the song name and then watch their renditions while trying to find the actual video they’re looking for. Brilliant, but tacky.

All that aside, I attended the Six Shooter Records free barbeque, not only filling my belly with delicious veggie burgers, but also my head with great music from some of their acts. The day was a rainy one, but Six Shooter were ahead of it all, having put up tents all around their back lot, and even bringing in dozens of bags of gravel to put on the ground to prevent bbq’ers from getting their feet soaked. The highlight for me was of course Martin Tielli of the Rheostatics, who was joined by Luke Doucet and Selina Martin. 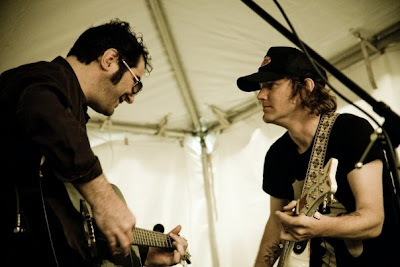 We left soon after to go to a Secret Session at TARA, where we caught the tail end of a funky group, whose name I unfortunately cannot recall.

That evening, I managed to catch Novillero at El Mocambo (sans horn section, which left me slightly disappointed), and then walked all the way to the Whippersnapper Gallery on College St, in the hopes that I would meet Jonas Bonnetta from Evening Hymns whose set I had missed. The lineup wasn’t very long, but the capacity of the room was small, so we ended up visiting Soundscapes record store across the street, and who else should be in there than Jonas himself! It was one of three occasions that night when someone called/spoke/yelled out my name. After leaving some discs to be sold there (hint hint, “Dichotomy” is now available at Soundscapes in Toronto), we headed to Lee’s Palace to catch C’mon who were the tightest performers of the entire festival (that I saw). We kept moving, and caught Hot Panda at the Horseshoe Tavern. I’ve been seeing their name a lot lately, so I figured I’d check them out. They were definitely energetic, but I find myself getting bored fairly quickly with what I would consider to be some of the more typical indie acts. Grand Analog was next at the Reverb, and was a great performer. It was interesting to see them live, because I had the opportunity to book them for the Superior Youth Festival in Thunder Bay, but left the decision up to the local skateboard coalition. Grand Analog was humourous because at one point a girl (with a guy in tow) jumped up on stage and started dancing and giving peace signs and more, all the while Grand Analog kept performing and even sarcastically commenting on how much they love the Reverb, because of the great importance they place on stage security. Once that concluded, we kept walking, dropping in at the Hideout to see the corpse painted faces of Fattooth, one of which was a Joker lookalike.

Sunday was a lazy day, heading to the beach where I fell asleep and burnt my face a little, followed by visits with some friends from Sioux Lookout, including Nick Sherman who will hopefully be recording a new album at Dining Room Studios within the next year or so. 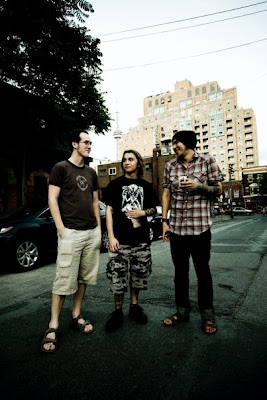 After some delicious homemade lasagna, we decided to forego the NXNE schedule and check out the MMVA’s. Yes, I went to NXNE and ended up seeing Nickelback.

However, it was hilarious, because Lady Gaga’s performance concluded with her leaning back as sparks/flames shot out of some wire frames that were covering her breasts.

All in all, it was a very random day, but more fun than schedule ridden. 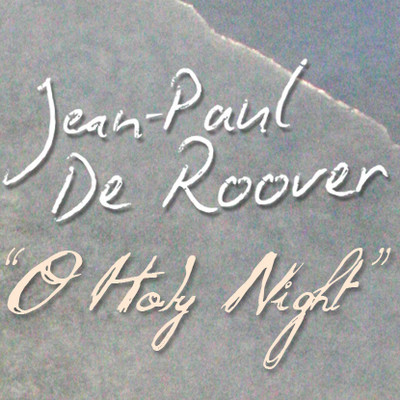