Get Up and Get Out – North American tour dates announced! 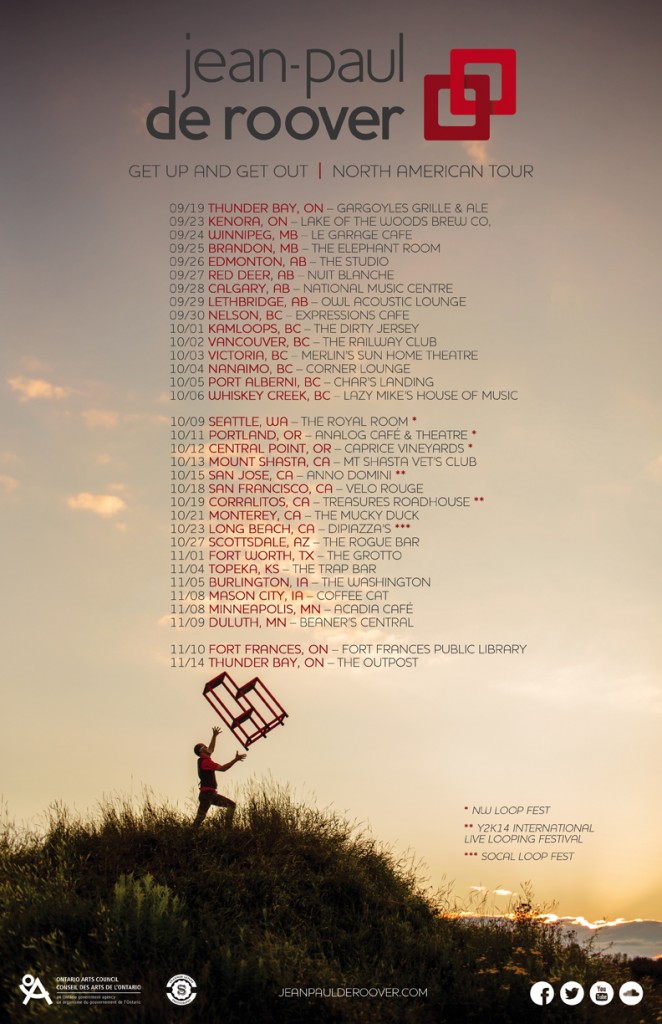 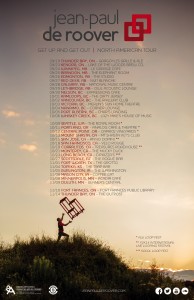 September 8th, 2014
“The mad scientist of the Thunder Bay music scene” [Exclaim! magazine] is heading back out on the road, but this time taking his music beyond the southern border.

Beginning on September 23rd, De Roover will depart for Western Canada heading as far out as Vancouver Island, BC before heading south to Long Beach, CA then back East to Austin, TX eventually heading homeward to Northwestern Ontario by November 11th. The tour is funded in part by the Ontario Arts Council.

Some highlights of the tour include stops at several festivals including the Y2K14 International Live Looping Festival (Santa Cruz, CA) the NW Loop Fes

t circuit (WA and OR), the SoCal Loop Fest (Long Beach, CA) and Nuit Blanche (Red Deer, AB). This tour will see De Roover performing solo, but adding to his existing live looping arsenal by incorporating elements from the newest album through samples as he performs at venues varying from rock clubs to house concerts with material that is sure to impress, whatever the setting.

De Roover’s professional career has seen him spending less time on the road this past year. After working on a film score for an IMAX documentary over the Fall and Winter of 2013/2014, De Roover temporarily relocated to Toronto to work with the team at Coalition Music, known for their commitment to artist development and education (as well as managing Our Lady Peace and Simple Plan to name a few). His personal life has also seen changes, having bought a house promptly after returning from Southern Ontario and getting married to Shannon Lepere, his part

ner of almost 7 years. In fact, the upcoming tour’s name comes from a lyric in the song “Hope” (from his 2013 album “Complexity in Simplicity”), whose acoustic music video will feature Lepere on guest vocals. The video will be released later this month in conjunction with the beginning of the tour.

Despite taking these considerable personal and professional strides this year, De Roover is excited to go back to the drawing board for some new recording projects. But before that happens, he’s heading back out where he belongs – on international stages.

2 Replies to “Get Up and Get Out – North American tour dates announced!”

Any chance of you coming to Barrie ON? I’d love to host a house concert. Or, perhaps, you could play at a place called the Clarkson Pub. The Clarkson is quickly becoming a favourite stop on the Canadian indie scene, so you’d be a great fit there. Your contact there is Christian Hampshire. Say ‘Hi!’ to Shannon from the Barrie Knapp’s!
Rob

Just sent you an email, and thanks for grabbing a copy of the new album!