The good ol’ tourmobile had been acting funny; it’s RPM’s dropping by 500 every couple of minutes or so, making the vehicle feel like someone was holding onto the back bumper slowing it down from time to time. At this point in the tour it was doing alright, so I let Shannon take a turn driving it, as I’d had quite a few really long days because of CMW. We had an ongoing joke that I didn’t want her driving because she might do something to the car, so I got quite upset when AS SOON as she got behind the wheel, she couldn’t get the vehicle to accelerate with her foot to the floor while only going 60 km/hr. We switched places again and crawled to the nearest exit that took us back to London, where we found a Ford dealer. It turns out that the problem was a fuel pump, but it took them a while to diagnose it.  Thankfully, the fuel pump (as well as some additional repairs on sway bars and more) was covered under warranty, so I didn’t pay a dime! 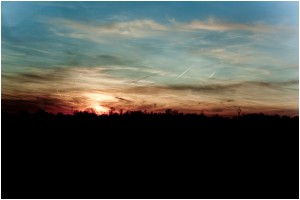 However, I had to play in Windsor that night, so I made some phone calls and got in touch with Reggie’s roommate Doug who had a van. He became ‘the man’ when he drove us to Windsor in order to play the show, and then drove us back to London to crash that night. The Phog Lounge had just introduced poutines, so I made sure to treat Doug to one of those before he went to visit with his family who lived in Windsor. 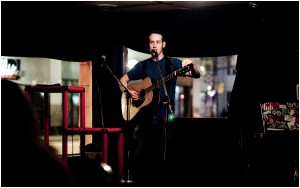 The show went really well, with DJ Whyme opening the show with some live electronica. I ended up visiting with a new friend that I had met at CMW, Patrick LeBlanc, a singer songwriter who was definitely a great person to connect with, as he knows everyone at the conferences, and we shared many a discussion, including watching some of the looping product displays. I played after DJ Whyme, and got a great response (the crowd was substantially bigger than the last time), including some folks that run another bar in Windsor asking me to come back in June. We’ll see about that, but right after my set was Stefan Cvetkovic from Michou. He has a live looping set up as well, but had been having a really bad bunch of days, having broken several drum skins, and a bunch of other gear malfunctions. 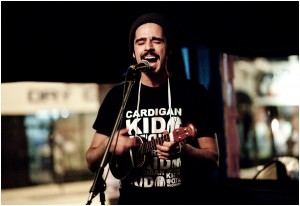 We then returned with Doug to London, where we spent the next night partying for St Patrick’s Day. And by party, I definitely mean that Shannon fell asleep at 9:30 while I watched X-Files in Reggie’s basement while a college keg party happened upstairs (party fail!). The next day, there was nothing else to do but get addicted to the newest video game craze: Peggle. Shannon even downloaded to her iPhone later. Nerd-dom, for sure.