I crashed in Saskatoon for 2 nights, hanging out with Joel Hryniuk from Volcanoless In Canada. We were to rock Lydia’s Pub the 2nd night, as it was also the ‘end of school’ party for all the university students. 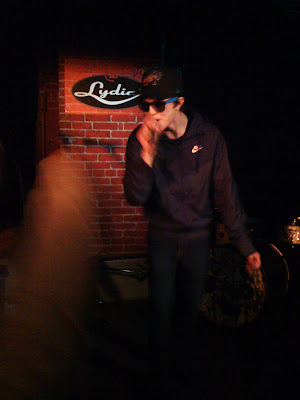 Kirk’s Big Frat House started off the night, rapping about teen ‘staches and all the ‘biddy bullshit’. I went on right after that, and had a blast. After, Volcanoless took to the stage and wow, everyone just went berserk! I’ve circled the photo below, because I want you all to notice that there were people hanging from a beam that ran through the middle of the bar, sometimes having beers poured down their throat, and there was even crowd surfing mixed with more beers being thrown across the room! 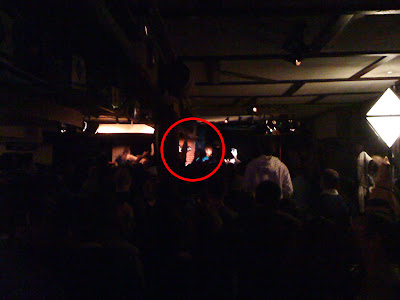 The sound guy even said that they know it’s a good show when they can measure the depth of broken glass on the stage.

But before the show ended, I was running a merch table for both myself and Volcanoless and encountered some true scum. Two girls ended up coming up to the table, and were chatting on their cell phones, nothing out of the ordinary. One of them mistook me for someone they knew, but they continued to hang out there (I was in a high traffic area). I looked toward the stage for a bit, then looked back, and noticed that there was a cd missing. Now, I wasn’t 100% sure if I had accidentally failed to replace it from a previous sale, so I didn’t say anything, but kept my eyes open. They continued to loiter, and then started to make out with one another. I kept my eye on the merch, and then a few minutes later one of them came up to me and kissed me on the cheek and said ‘bye hun’, possibly still misrecognizing me. As they left, the other girl reached out and grabbed a different CD from the table and put it in her purse. I was livid, so I yelled “hey!” after her but they scurried out of the bar. They returned a few minutes later, at which point I ran up to the most recent thief and our exchange went something like this:

If there’s an argument against illegal downloading, this story fits in with it. Just because you ‘promise to tell your friends’ about the artist/album/song, doesn’t make it right.