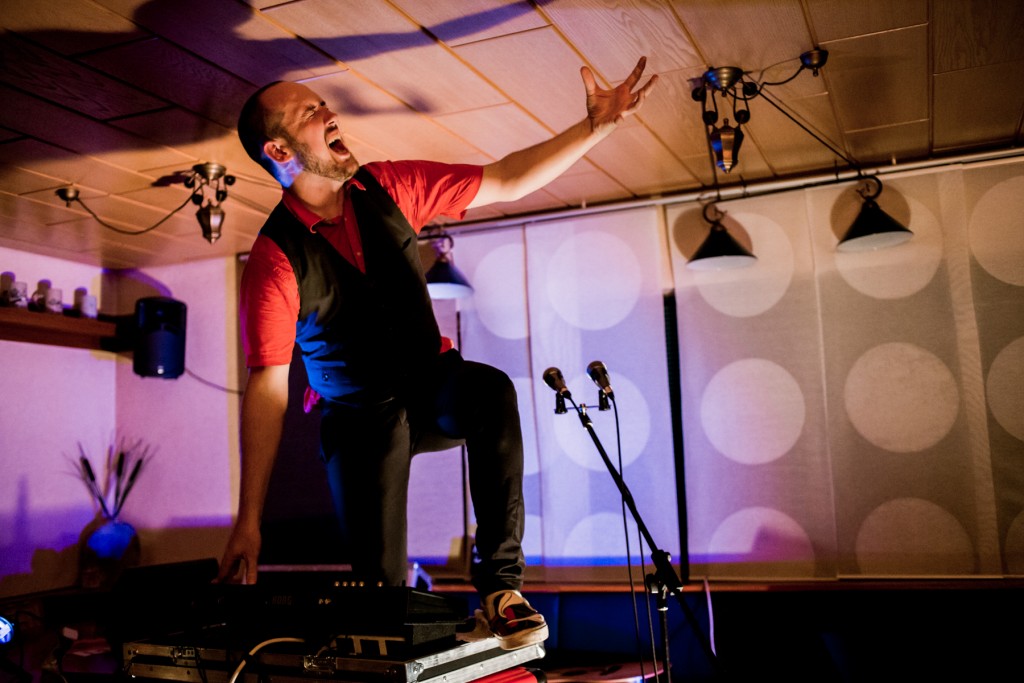 With the cancelation of one of the other promo activities that day, we were asked if we’d like to stop by one of the Syrian refugee camps to help with a music workshop. We joined Mona at the Songs & Whispers headquarters and walked over with a couple of guitars each.

There are no photos for this post, because we felt it wouldn’t be appropriate. That being said, it didn’t look like a lot of the refugee tent camps that you’d see on the news. The buildings were all modular, similar to a sea canister or a rail car, and very modern. There were common areas for school-type activities, an art room, a playground outside, a courtyard and bathrooms scattered throughout.

The kids we met were great. I was working with a 16 year old boy, while Mona was teaching an 11 year old girl. Shannon was meanwhile helping some other very young children with some drawings. As you can imagine, there were some translation issues, but, the boy I was working with spoke English better than German because he learned it by watching TV back when he was in Syria.

We worked on a few chords for about 45 minutes. We had settled on “Time of your life” by Green Day, a fairly easy, classic acoustic guitar song for beginners. Anyone that has ever taught guitar will know that it’s around this point when a student’s hands start to hurt. So, since he had been learning with me, I asked him to show me something instead. We went outside and played soccer for the other 45 minutes.

I used to play soccer when I was much younger, so I was a little out of practice. We tried to keep the ball in the air for as long as possible, and my hackey sack skills came into play. We were joined by a couple of other kids and were playing a variety of different games. The next day, I wondered why my head hurt so much, and I realized I had bruised my forehead by heading the ball over and over and over again so many times.

This experience even inspired a new song – maybe you’ll hear it before the year is over!

When we heard that Dohm-Eck was a private bar, we were kind of nervous. I mean, we figured it’d be like a house concert, but with more booze. We drove through the countryside (again, at night) but didn’t really see anything. Seriously, the entire trip I think we saw one instance of roadkill. 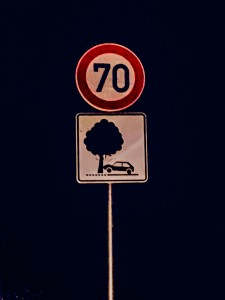 Whatever you do: DON’T HIT A TREE. 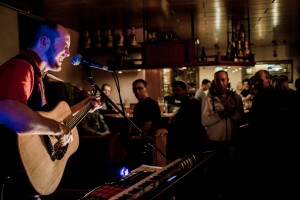 When we arrived, we waited outside for a bit. It’s the waiting that really kills me, and I started to dread going in. Finally, Jose (works in the kitchen) arrived and let us in. Shortly, Marc, the owner, arrived and started chatting us up. This was one of the very first times that a host spoke perfect English! You don’t realize you’re doing it, but when you have to speak to a native German speaker, you start to speak in English a bit slower, and often rephrase certain sentences just to make sure the sentiment came across. Anyways, I digress. Marc was an amazing host, and the “private bar” that I was nervous about ended filling up with tons of people. Why was it full? Because Marc literally opens it up only once or twice a month. So when he does, you know it’s going to be a good time. Typically only for a concert (like the series I was a part of) or occasionally special presentations. He just likes to have a good time and invite all his friends to his bar. He’ll hire out staff for the night (usually always the same staff) and it’s a party. What an awesome concept. 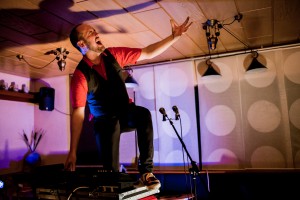 Marc continued to be an awesome host by feeding us not one item from the menu but ALL of them. French pizza, nachos and a meat/cheese platter was overly filling. Speaking of filling, let’s get back to the show. The room was packed. Both in front of the bar, and directly across from me in a different room – it’s like they were looking through a wide open window at me). It was the biggest crowd yet.

There were two incredibly funny/awesome moments. The first was the fact that I got 4 encores. Four! I totally blame Marc for that, he was the (hilarious) instigator. Secondly, Shannon was talking to a fellow named Olaf at the bar who had some choice words when I was singing falsetto: “Where did his balls go?” Amazing. 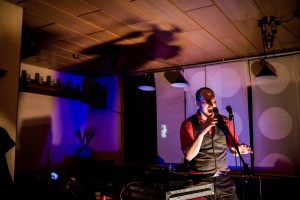 By the end of the night, we were thrilled with the show, the turnout, and of course our hosts, Marc, Jose, and Otto (behind the bar). I can’t wait to go back to Germany, if ONLY to play here again.

11.06 – Bremen, DE – Schwarzer Hermann
I have no photos from this show, for one main reason. It is a smoking bar. It’s not like “I refuse to take photos in here because there’s smoking”, rather, Shannon is allergic to cigarette smoke, so she stayed back at the apartment while I played  the show.

That being said, it was very nice and welcoming to have the owner Johannes putting around little signs encouraging the soon to be audience members to only smoke after the show had ended – and they did!

Before the show, Astrid (from Songs & Whispers) and I hung out at the bar and caught up. After emailing back and forth for close to a year, it was nice to actually chat in person, and not have to be so formal. She then made what it now one of my favourite quips; “Germans are embarrassed of two things: the Nazi’s and the Scorpions.” Zing!

The show itself was fun too, and we had some very vocal people (like Susanne) singing along from the back of the room. I even made a new friend, Christian Pasche. He had spent some time living in the US, and we connected over a Danko Jones cover song I played earlier that set! We’d meet up again later on the tour, but again, it was so great to make friends overseas!

I try not to be negative about shows, but this one was a big ol’ waste of time. Not only was it a smokey bar (which is annoying for many reasons, including loss of voice and the fact that I can’t get the smell out of my gear for a long time), but the crowd was quite disrespectful. No, they didn’t throw anything or heckle, but there was absolutely zero response. Oddly enough, it had the biggest PA and overbearing light show, but a totally useless sound tech. While the gig was around the corner from the artist flat, it still felt like an inconvenience.

The ONLY positive, was that there was one individual that interacted with me. His name has long been forgotten, but he wore a Spider-Man shirt that he was showing off to everyone, so I only refer to him by that. He also yelled (ahem…slurred) the amazing line: “I am German, I am drunk!” I managed to catch some of Spider-Man’s dance moves on camera, but that’s for my own personal enjoyment…sorry! 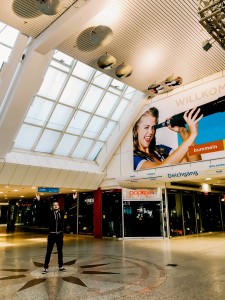 This show was awesome in premise. I was supposed to be playing at a movie theatre, before the film. It’s an awesome idea: there’s a captive audience, and who wouldn’t mind a little music prior to the show? The reality was that through what I hope was a scheduling error, the show was scheduled for 11AM on a Sunday. I figured a Sunday matinee, good call! In fact, everything shuts down on Sundays, so the giant mall that the (really cool) indie theatre was in, was in fact closed. So the photo above is me standing in an abandoned mall. 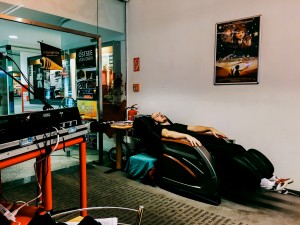 Still, I thought, there might be some people destined for the theatre anyway. WRONG. The first movie wasn’t until 2:00 PM. I was to play from 11 until 12:30, that’s it. So now I wouldn’t be getting any captive audience members, nor would there be any walk-ins from the mall. I literally looked like the stupidest busker of all time. So I took a nap in one of those massage chairs. 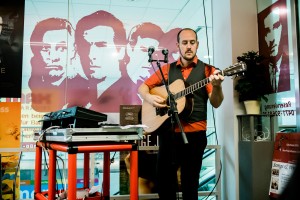 The good news is that I just improvised for a few hours, and I think there might be some cool new material coming out of that! 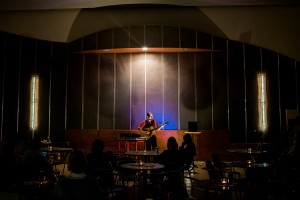 The theme of the last few shows was “Bait and Switch.” The premise was awesome, but there’s always some catch. When I saw the name of the venue ‘BuS Huchting’, I thought it was a bus station depot. That’s a place with lots of busking action, so it made sense. Then I checked the website and saw that it’s a really cool cultural centre with a massive stage. I was stoked! We got there for load in, and found out that I’d actually be performing in front of the stage. Not on it. That was a downer, but at least the space was awesome. Lots of natural reverb. 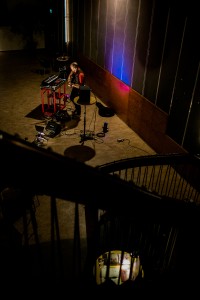 This was one of the first times that “snacks provided” actually meant snacks. We were quite hungry to only find out that there were pretzel sticks. Ah well! 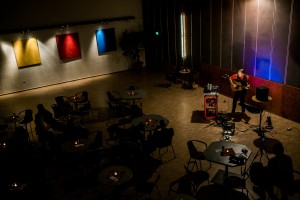 Cabarelo was an incredibly upscale restaurant. It kind of boggled our minds that they’d even have live music there. It was connected to a building that housed a senior’s home, so I feel like we frightened some of the patrons that were there for dinner by just showing up with all of our gear. 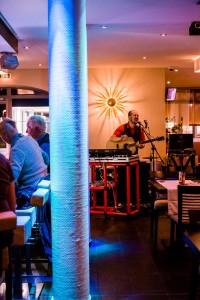 This was the first time that I joined Echo Bloom on stage for one of their songs. We’d end up doing it many times over the tour, and if I find a video, I’ll share it! 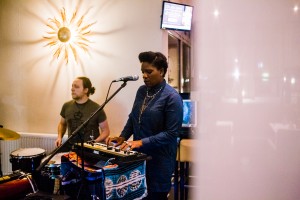 Keeping in theme with the rest of the week, there were only 4 people for our sets, but Shannon and I still made friends with Graziela and Bruce. Graciela studied in Canada and Bruce is originally from South Africa, so we had lots to chat about. 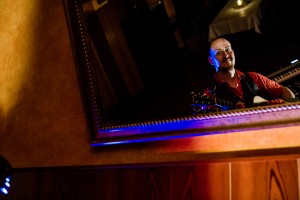 The Wessels Hotel was a very cool old hotel. It had several big rooms in it, so I set up in one while the hotel owner took care of us. 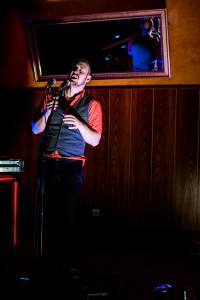 Shannon ordered a very interesting meal, called Hawaii Toast. The simple description was a piece of toast with ham and pineapple on it, but then SMOTHERED in cheese. To the point where you couldn’t see anything else.

Unfortunately, there was only one person at the show, so it was an incredibly intimate show. Katharina was a wonderful audience member! 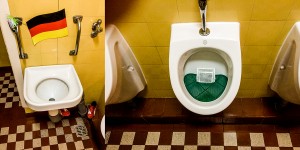 But at least there was a hilariously German bathroom. Not only were there flags everywhere, but there were soccer nets in each urinal, so each piss would be a Goooooooooooal. AND. There was a vomit station with handlebars! Funny enough, Shannon reported back that there was no vomit station in the women’s bathroom. 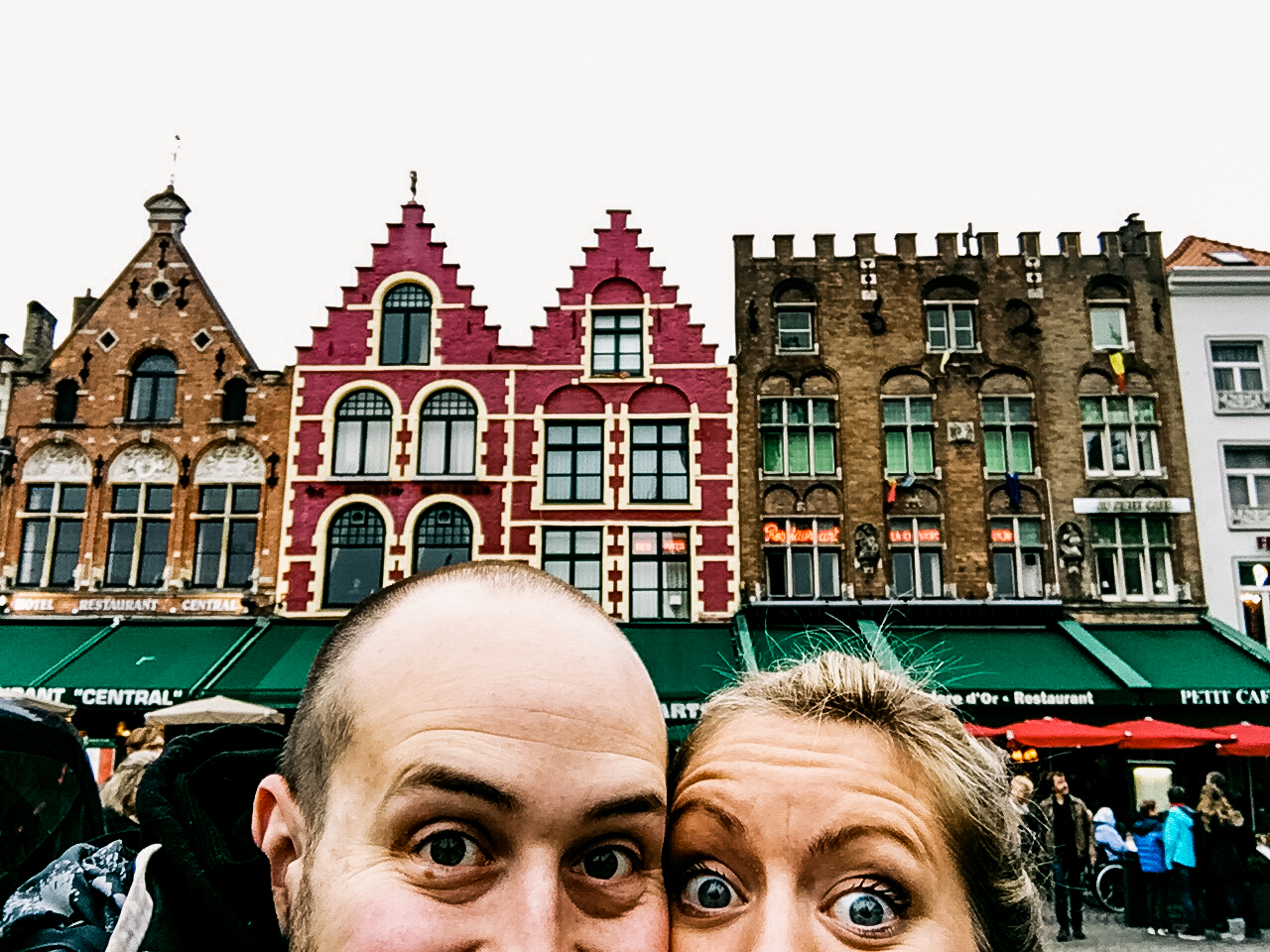