The roads through the mountains were not the best, and I encountered snow again. 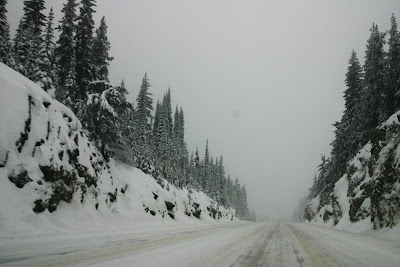 In Kamloops I finally shared a stage with an artist similar to me. Devon (of DevonanKevin) was also a solo act, using an acoustic and a lap steel through an RC-2 loopstation. Pretty standard fare, except that he also had built a wooden box out of plywood and duct tape that he would mic up to create his own stomp box that truly mimiced a kick drum sound. Before the show I did an interview with Kyle for CFBX, and he asked about my sideburns: I suppose I have been growing them for a while! Last trimmed on September 22nd!

Pogue Mahone was a really nice bar, and the promoter.

Sean is one of those guys that really understands promotion and is also helping to foster music within the youth community of Kamloops. He put me up for the night, in his well setup basement meant for film watching. So I went to bed quite late after watching Jacob’s Ladder.