I ended up driving to Fredericton to hang out with the guys in Ninjaspy and What’s He Building In There? I caught their set at the Capitol, as well as Endast and We, The Undersigned (who were having their CD release). After their show, we crashed at WTU’s house, where I made good friends with Liam from WHBIT? and Ace Kinkaid. Interesting story, the singer from WHBIT? was one of the most interesting people as he was actually approached to become one of the frontmen for one of my favorite metal bands, Sikth. I also experienced my first bit of east coast hospitality: I dropped by Crumbs Cafe to check it out, and I ended up walking out with a belly full of spaghetti and salad, despite having walked in on what appeared to be a ‘private party’. 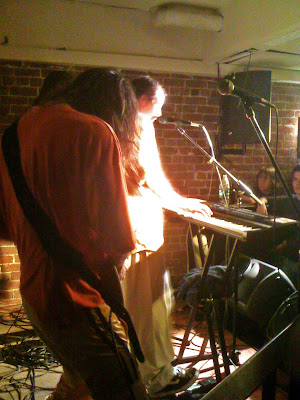 What’s He Building In There? at the Capitol in Fredericton.

The next day I played a quick set at Crumbs Cafe, meant to be a teaser for my show a week later.