On my way out of the maritimes, I thought I would crash in Quebec city, but I decided that I might as well keep going, and ended up in Montreal, but first, I stopped at this strange sight. It was a photography studio, with a pirate flag. Strange, but cool! 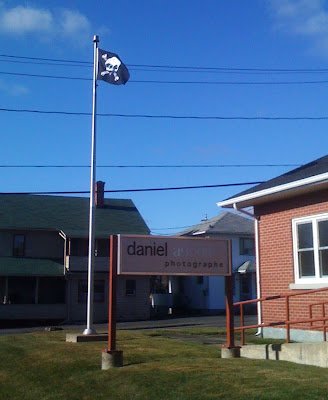 At Bar St Laurent 2, I played with The Attic (whose house I crashed at for 2 nights, thanks guys!). It was also their very first show as a band (at a bar), so they were excited, did a really great job, and had a bunch of friends come out and dance to them! Also on the bill was Nadia and the Tchotchkes, whose name is equally as awesome as the music. They had another gig that night, so they took off early, but overall it was a good night.