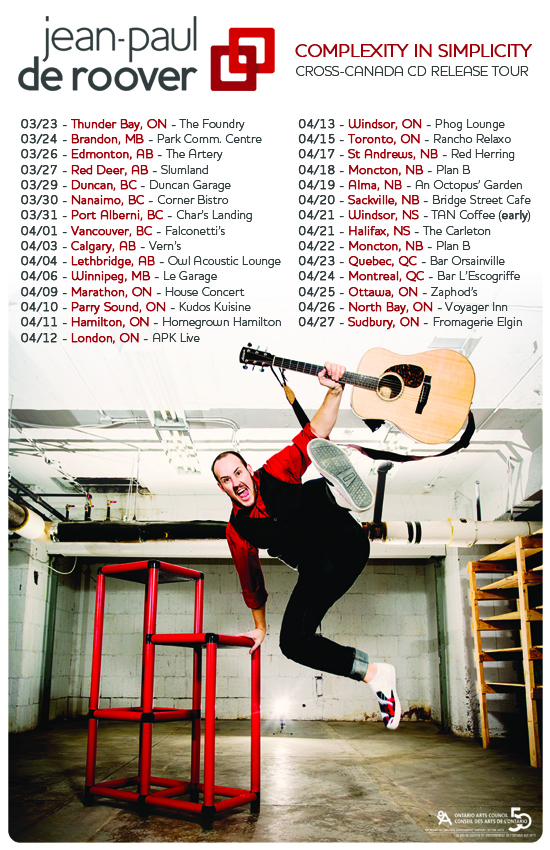 With the new CD out this week, I’ve got a lot of things on the go, including prepping for the next national tour. It’s going to be awesome, I’m hitting up both coasts, playing with some friends and some new faces, but the best part is that I’ll be playing a lot of brand new material you haven’t heard before and I can’t wait for you to hear it!

Go to the Music page, and you can hear the first single ‘One By One’.

“The mad scientist of the Thunder Bay music scene” [Exclaim! magazine] has been hard at work since his last full-length album was released in 2009.  After touring North America incessantly, with music videos featured on MuchMusic, showcases at international music festivals, two EP’s and several award nominations later, De Roover is ready to unveil his newest album.

Complexity in Simplicity will be launched at a special CD release event in Thunder Bay at The Foundry on March 23rd, and will feature De Roover and his brand new backing band with Dennis Dumphy on drums and Chris Dorota on bass guitar. The spring tour will still see De Roover touring solo, but adding to his existing live looping arsenal by incorporating elements from the new album through samples as he crosses the country for the rest of March and April. Performing at venues varying from rock clubs to house concerts, De Roover’s new material is sure to impress, whatever the setting. His most recent EP, the a cappella ‘Pitch Pipes’ (2011) was well received and received several nominations at the Northern Ontario Music and Film Awards in 2012.

Born in Thunder Bay, ON, Canada, De Roover was raised overseas in Africa, Asia and South America before returning to Canada in 2001. Since starting his career as a solo artist in 2007 he has had opportunities to perform at big festivals like Canadian Music Week, NXNE, and dozens more, as well as share stages with artists like the Beach Boys, Goo Goo Dolls, Beardyman and many, many more.