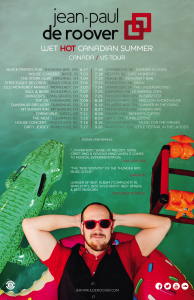 “The mad scientist of the Thunder Bay music scene” [Exclaim! magazine] is heading back out on the road, taking his music beyond the southern border…again.

After touring North America for most of the Fall of 2014, De Roover still wants more. Starting with a tour kickoff at the Black Pirates Pub in Thunder Bay, ON on June 17th, De Roover will make stops around the southern side of the Great Lakes before entering southern Ontario for a string of shows and a performance at the first Musiikki Festival in Kingston, ON, speeding westward to California for a week and the Carnevale festival in Weed, CA. Afterwards he’ll head North for several stops in British Columbia including Summer Sounds festival in Cranbrook, BC, before returning to Thunder Bay in time to perform at Buskers Festival on June 26th. August will also see De Roover performing at more festivals in Northern Ontario including Summer in the Parks in Thunder Bay, as well as Tumblestone in Lappe.

This summer will continue to see De Roover performing solo, but adding to his existing live looping arsenal by incorporating elements from the newest album through samples as he performs at various types of venues with material that is sure to impress, whatever the setting.

De Roover’s professional career has seen him spending less time on the road. After working on a film score for an IMAX documentary over the Fall and Winter of 2013/2014, De Roover temporarily relocated to Toronto to work with the team at Coalition Music, known for their commitment to artist development and education (as well as managing Our Lady Peace and Simple Plan to name a few). His personal life has also seen changes, having bought a house promptly after returning from Southern Ontario and getting married to Shannon Lepere, his partner of almost 7 years.

Despite taking these considerable personal and professional strides this year, De Roover is excited to go back to the drawing board for some new recording projects. But before that happens, he’s heading out for a string of summer shows and festivals across North America.

Want to hear the last album in it’s entirety? Listen to “Complexity in Simplicity” from front to back on YouTube: