Finally played at the Dude Ranch in London! It’s this awesome punk rock basement where they host shows on weekends, and I was originally scheduled to play there a while back, but the basement flooded. I was glad to be back in a little haven of Northern Ontario settled in the South. Seriously, everyone involved in that house is either from TBay, Schreiber, Marathon, Terrace Bay, etc. Unfortunately, they’re moving out / moving on, so this was the 3rd last show at the house. I only managed to take one photo throughout the whole night, but there was lots of sweat, singalongs and BBQ throughout the whole night! Big thanks to the fellow Ranchers for hosting me, and I’ve already been sporting my new shirt for the past few days. 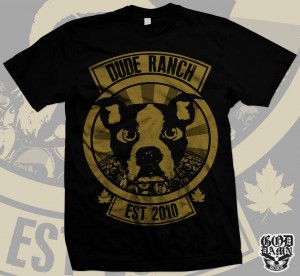 Here’s the snapshot of Thousand Young, but Black Frame Spectacle and Arkham Dispatch also killed it that night.

Ottawa was a fun time – y’know – hanging with Ignacio and Alicia (the usual folks I spend my birthdays with), but this time it was a St Paddy’s day partay. Josef Mieto (Ottawa), Redbird (Vancouver) and Portage and Main (Vancouver) also joined me at the Avant Garde Bar – where the theme isn’t so much green, but red – it’s a socialist Russia themed bar. Again, my pipes and shirt fit the theme well and I didn’t have to worry about colour coordinating with the occasion. Turnout was decent, but thankfully we didn’t get a lot of the rowdy green-beer-drinkin’ drunks. I think they were upstairs with Deaner from FUBAR.

We returned to Ottawa after the Wakefield show, where Shannon and I ended up walking around the Glebe district, checking out different shops and signs. We met up with Ignacio and Alicia, and we decided to head to “The Works” for supper. There they have epic burgers, including pop in large measuring cups. We managed to get there just before the supper rush, so we were even bribed to leave our booth sooner with free milkshakes. Who were we to complain?!

That night I played at the Avant Garde Bar again, except this show was different from the last time I played there. It was just an acoustic show instead of a metal show. Amanda Cottreau and her partner Steve Perron joined me, but the show ended earlier than expected because the room was ready to party, and not necessarily in the mood for serene acoustic music. I went on early, but we probably should have reversed the order, as my material tends to be quite loud for just one guy!

The next morning we ended up looking at pawnshops where we found a bunch of sweet used CD’s after having breakfast with my old friend Dionne Roche.