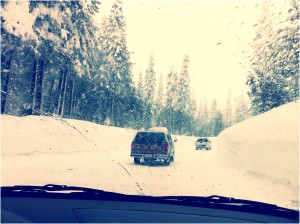 Where is Mt Shasta, exactly? It’s in Northern California, and while we thought the weather would be comparable to southern California, Jesus, were we in for a shock. That day, 10 ft of snow had landed upon the mountain. Yep. 10 feet. Seriously, what’s the deal with this trip and adverse weather conditions? I was supposed to play a snowboard festival ‘Rail Jam’ but 10 feet was too much even for the ski hill. They moved the show indoors and switched the Rail Jam to the following week so I still had a gig, but nothing to watch while it happened!

Regardless, both Shannon and I were there to visit with our old TBay friend Ryan Marchand, who now plays in an awesome band called The Lottery. We shared a few shows together during our Shasta visit, and it was cool to start to get to really know a town for once, instead of only staying somewhere for a few hours.

After the ski hill show, we played at the Legion, which blew my mind as it would take me about 7 minutes to get across to the other side of the bar simply because of how busy it was. It was a ‘moustache’ party, and they were also giving away free hot dogs all night, so it was a popular spot! After playing my set, I joined The Lottery on stage and did some improv vocalizations on top of their set.

We crashed at the place where Ryan was living, and met his housemate, Djin. Djin is important for three reasons; he was in an underground (yet influential) psychedelic band in the 70’s, he’s quite good friends with Billy Corgan (yes, that Billy Corgan), and he introduced me to White Flower, a strong chinese herbal essential oil that helps clear your sinuses in a ridiculously effective way.