Nelson was a rough drive. I left Calgary late, so by the time I was really in the mountains, it was pitch black, and then it started to snow, with tons of wind. As I started to make my descent, the snow changed to rain, which definitely didn’t make the drive overly enjoyable.

I arrived at the Velvet Underground (a day early) and found myself at an all ages dance party that would run until 4 am. Dave drove me back to their place (where I’d crash for 2 nights) earlier than the close of their event, and I slept for quite a while. The next day, I awoke to an awesome view, and a fire place that kept me warm all night! 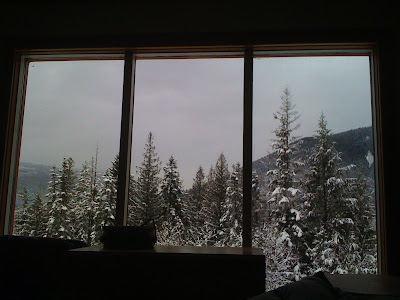 Nelson was a pretty little town, and I was excited to play at the Velvet Undergound that night. Afte a little soundcheck, I played my set to a really excited audience. Everyone really appreciated the music I was making, and I was really excited that they had all taken the chance on a random Sunday night show at a venue most of them had never been to before. Dave and Simon were very kind, and gave me food for my entire stay there. That was great, as Dave was actually a culinary artist!