I’ve really gotten attached to being up here in Iqaluit. I’m going to be quite sad when I leave on Sunday afternoon. Sure I’ll be glad to be back home with everyone I know well and care for, but still, there’s something about being up here.

Last night and the night before were the first nights that I’ve seen northern lights since I’ve been up here. Mostly because the skies have been cloudy ever since I arrived. The other night they caught me by surprise: I just looked up wondering if they’d be there, and sure enough, they were. Nothing fantastic, and actually quite difficult to view, since they were DIRECTLY overhead. Wearing a large parka and trying to look above you (while walking on a road) makes things substantially more difficult. I also had to keep holding up my mitts to block the street lights, since they were preventing my view. Something else obstructing my view: the various emergency vehicles passing me on the road towards a location across from the residence (already extinguished). 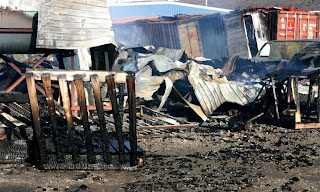 I found out the next day that a courier/delivery service called Arctic Express had it’s warehouse burn down. I took photos the next morning, as it was still smouldering, and I’m curious to hear more details, as there was a young woman there who went to the edge of the wreckage (as close as the police would let her) and dropped off some flowers. Apparently because of slow business, Arctic Express had been renting out parts of the warehouse for people needing a place to stay (remember, the housing shortage ongoing in the north).

However, last night, I witnessed the northern lights again, and I’m going to have to write another blog about that experience, because there’s so much thinking and writing to be put into that.