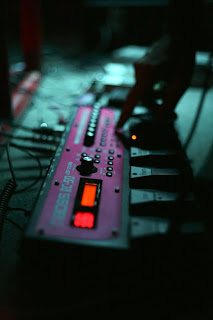 I played my first show north of 60 last night! I went down to the Kickin’ Caribou and played the open mic night. The host Moe was very nice, and I played for QUITE a while. I then jammed with a girl named Anna (I think…), and then again with Moe afterwards (just covers and such, but it was still fun).

I’m glad that it went well, as it was hell getting there. If you check my previous posts with the map links, you’ll figure out where I’m residing. Now I had to walk about half way to the Youth Center (middle of town), while carrying a guitar and a duffel bag filled with: loop station, kp3, 2 pedals, 6 cables, headphones, mic, cd’s and other miscellaneous crap.

Digression: here’s an awesome picture of my loopstation, taken by Shannon Lepere

The weather that night was awful, and I have a bruise on my leg because the wind kept knocking my guitar case into my leg right behind my knee. When I got to the show, I looked at my left arm and was shocked to notice 3 weird lumps on the underside of my forearm. I tried massaging them, but they hurt to the touch, and I started to get freaked out. After about 40 minutes of being seated at the lounge, they disappeared, thank goodness. I got on ‘stage’ after a little bit, and was soon being requested by some locals to have songs sung about them. The one that I remember was called “Reepa”, and the lyrics were:

There was a first verse, and it gave context to the ‘identification’ part, but I can’t remember it for the life of me. That’s what happens when you do improv stuff.

I experienced racism for the first time last night, when I caught my first cab after the open mic. What happens when you pick up a taxi is that they pick up people on the way as well. So, on the way to the residence, we picked up an additional 4 people. The first old guy was was no big deal, just got off at another bar, but then the next 3 had been drinking a fair bit (mind you…this is at 10pm) and get in the car. The guy beside the cabbie asks “do you like George Bush?” and I had no idea what was going on. I figured at worst, the guy was just drunk and trying to carry on some conversation in his head with the person closest to him. The cabbie tells him to fuck off, and that he ‘doesn’t want that kind of shit in his cab fuck’. This is when the passenger says “go back to Syria”, and the comment about GWB began to make sense. He was accusing the cab driver of being a terrorist, etc [he was of middle eastern descent]. The man sitting beside me pointed to the front passenger, and excused his behaviour, when the front guy turned around and started pointing at me, and yelling “white man! white man! white man!”. The cabbie tells him to shut up again, and his reply is “you stole my taxi business”.

There’s a fair amount of hatred in this city, and the taxi driver made a very good point:
[referring to the one guy in the passenger seat]…”terrible people…when you’re drunk you say the things that you have in your heart. Terrible…”

So, with sore arms and legs, I got out of a long cab ride, feeling tired and hated, for no reason other than the colour of my skin. It’s very interesting being on this side of the hate. Growing up all over the world, I never really experienced such prejudice, however, I was much younger, and never really exposed to the ‘outside world’. And in the grand scheme of things, this encounter was no big deal.

“so what? you had a guy yell at you for being white”

It’s true, no big deal, but still, I thought it was an experience worth writing about.

This evening, however, I had a delightful time! I hung out at the youth centre once again, and joined in the cooking club, making beef stirfry and apple crumble. I still haven’t fully been exposed to the absolute best of Iqaluit (although the restaurant with $55 steaks may be close), nor have I really experienced the worst. I think my interviews and my research will begin to give me answers.

For now, I am heading back to my room to shower. I even caved and bought a towel, as I’m tired of toweling off with a polyester t-shirt.

Sadly, a connector to download photos from the camera is $21.99. Sorry readers…$3 towel comes first. And then shampoo…I left it in the showers and it got stolen. Damn!

3 Replies to “Northern performances and racism”

Wow – i’m so glad you’re doing a blog because I doubt i’d get to hear half of this stuff by the time you make it back. Be safe and have fun!

Racism — what a horrible thing. Just imagine, all these kids your writing your thesis on have probably already experienced it first hand.. or will when they move to Ottawa.